Here's a crazy idea for a nimble studio set up: two iPads running Photo Soft Box to illuminate your subject, then take the picture with an iPhone 4S using Camera Awesome. For the finishing touch, open the image in iPhoto for iOS to crop and remove the location data. Now all that's left to do is upload the image from iPhoto to Flickr.

Sounds like a lot of fooling around, doesn't it? But take a look at the picture. Not bad. I know the iPhone isn't a 5D Mark III, but it does OK in a pinch.

I created the whole set up on a shelf in a closet. First, I set the iPod mini on a black iPad case. I then placed one iPad running Photo Soft Box on the left, and another on the right. I moved things around here and there until I got the look I wanted. Since you can set the color temperature in Photo Soft Box, I chose 5500K so I wouldn't have to do any white balance correction later. 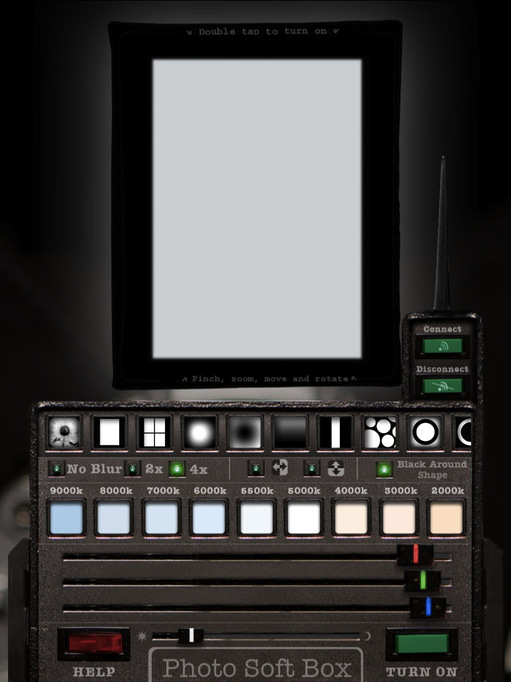 The Photo Soft Box interface running on an iPad. Once you tap the settings you want, double-tap the screen to turn the entire iPad display into a soft box.

After I captured the image with the iPhone, I opened it in iPhoto for iOS for cropping and to remove the location data before sending it up to Flickr.

So, two soft box lights ($2.99 for the app) and the iPhone 4S for my ultra nimble studio set up on the go. If I were just using these tools for this, you could say that it's a rather pricy portable studio. But obviously I use the iPad and iPhone for a million other tasks. Well, now make it a million and one.

So you consider it normal to own two iPads..?

You can use one iPad and a reflector :)

iPhonography has jumped the shark...