The Brydge Polycarbonate Keyboard is currently on holiday special for $130. That's $80 less than the anodized aluminum version that looks a lot like the keyboard for a MacBook Pro. I decided to save the money and go with the polycarbonate. And after hours of use, I don't think I'm any less happy with this model, than I would have been with the more expensive aluminum. 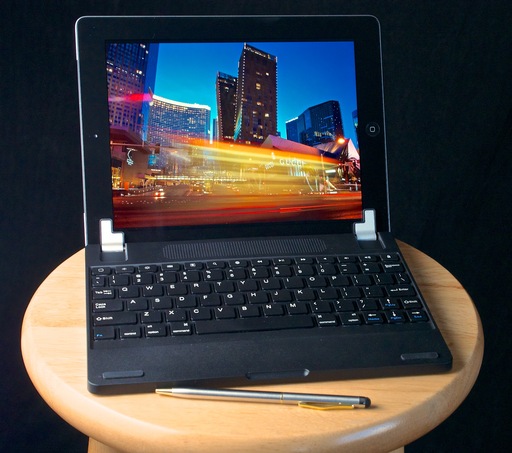 An iPad 3 with the Brydge polycarbonate keyboard. Photo by Derrick Story.

First and foremost, the Brydge is an adjustable viewing stand for the iPad. This is accomplished using a pair of finely-crafted hinges made from anodized aluminum. They have just the right amount of resistance, allowing you to rotate the iPad nearly 180 degrees.

For the first time, I consistently get a great viewing angle for browsing, watching video, and viewing photos. You could position this combo vertically, but it feels a lot like doing a laptop thing... which looks a bit weird. When used as designed, horizontally, I think the Brydge is a great iPad stand.

The Brydge features a full Bluetooth keyboard that includes a row of iPad-specific function keys. You can use these keys to return home, adjust brightness, change volume, control playback, and more. The key action is good, but not as firm as a quality laptop. No big surprise there. The Bluetooth connectivity works well, and you can conserve battery power by disabling it via a switch on the right side. When the Bluetooth is on, the keyboard adds some helpful controls to the iPad.

The only weird thing is that my brain goes into laptop mode and wants to use the nonexistent trackpad. Of course there isn't one. But there are plenty of function keys to augment operation.

By the way, I highly recommend having a stylus to go with the Brydge. For me, it was a natural complement to the keyboard.

And finally, the Brydge is an iPad cover. Its rubber pads on the inside handrest keep the screen a safe distance from the keys. You don't have to worry about scratching the iPad. It definitely adds thickness to the entire package, however, taking up more space than my 15" MacBook Pro Retina Display when closed. The polycarbonate Brydge plus iPad 3 weighs about 2.4 pounds. Keep in mind, though, that it does have to weigh enough to steady an upright iPad.

Two of the Brydge models include Bluetooth speakers built in to the keyboard. Personally, I don't think they sound as good as the iPad speaker. They're optional for the aluminum model, and I would save the money and go without them. The speakers come standard with the polycarbonate Brydge. So mine has them regardless.

In short, I like the Brydge. My favorite way to use it is as a multi-angle stand. The aluminum hinges are solid and securely hold the iPad in place. It's not bad as a keyboard, either. Typing is a little cramped, and it will take you a few minutes to get your touch-typing mojo flowing. I do like having the keyboard for email and notes, however.

As a cover, it is thick. But if you keep the Smart cover with you, you have the option to use the Brydge when you need it, and travel light with just the Smart cover when you don't. When I'm photo editing, for example, I prefer to hold the iPad unencumbered in my hands. It's easy enough to remove the Brydge for these situations.

If you're an iPad road warrior, you might want to consider this accessory. I think it extends the capability of my iPad 3. And it's downright fantastic for watching movies.

I might just have to check this out. For me the primary benefit would be the varied angle viewing stand as I've never been able to find one I like. My primarily use of my iPad is as a consumption device so I don't really mind the touch keyboard. My ideal device would be a touch screen MacBook Air.

Does it work with your mini? I have a mini coming this week and I'm torn between keeping it or giving it to my girlfriend. I do a lot of writing so if I keep it I definitely want a high quality keyboard.

Since it's a Bluetooth keyboard, it will work with the mini for typing. But as a stand, not so much. I would imagine that we're going to see some interesting keyboard options for the mini very soon. I would hang out and see what they are.