Google was busy yesterday, releasing new versions of both Gmail for iOS and Snapseed. The most noticeable change in Snapseed, other than the white background replacing the black for its logo, is in the Share menu. Google+ is now at the top of the list, and Instagram has been removed. (You can still get to Instagram using the Open In command.) 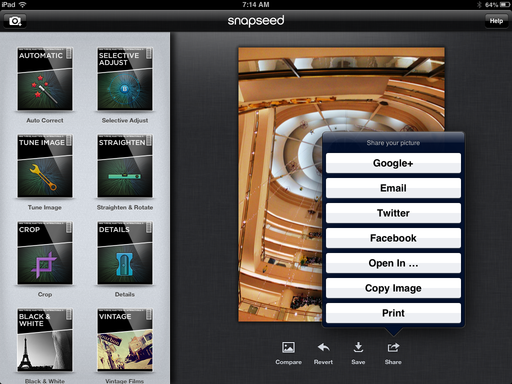 I know some photographers were concerned when Google acquired Nik Software. But this is a harmless change. And if you use Google+, it's really easy to post from Snapseed to your account. 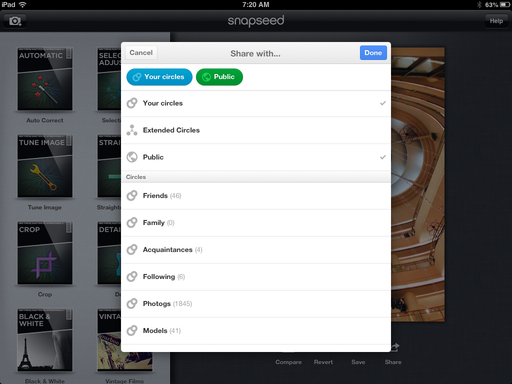 I like that you have control over the Circles you post to right within Snapseed. So you can choose the picture, write the caption, and pick the Circles without ever leaving the app. In my test, everything worked great.

Google also added a "Paste" option to the Open Image menu, which is now a camera icon instead of a button in the upper left corner. There's also a new Retrolux filter: "Use one of the newly created film styles, combined with a range of different scratches and textures as well as light leaks to create a truly retro look for your photos." As far as I could tell, everything else was pretty much the same and worked as smoothly as always.

Oh, and just one more thing: Snapseed is now free in the App Store. That's a pretty good change!

The Gift Guide for Photographers features 12 tempting goodies for the photographer in your life. Each item includes a background article about it and a direct link for the best price.

For me, what's missing is the ability to adjust the width and depth of frames. I'm not happy with the new frame filter. Also, being free concerns me, since Google is the king of advertising and collecting info about my comings and goings. Snapseed is too good an app to bear these burdens.

I don't like the new frames either. I reinstalled the previous version on my iPad.