How I Added 6 TBs of Storage to My Drobo 5D 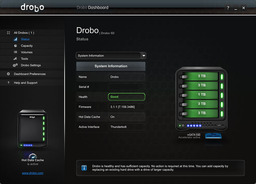 My Drobo 5D was on the edge. It was nearly out of space.

Here's the configuration after the upgrade with four 3 TB drives, one 1 TB HD, and the SSD chip.

My first Drobo setup featured two 3 TB hard drives and three 1 TB drives. And they held me nicely for a number of months. But recent checks of the Drobo Dashboard made me realize that it was time to upgrade a couple of those HDs. So I purchased a pair of Toshiba 3TB 7200 RPM SATA drives and began the nerve-wracking swapping process. (Nerve wracking only because when I tried this with my first Drobo, it wouldn't accept the upgrade. My hope was that things would be better with the 5D.)

The good news was, not only was I able to successfully add more space, but I was increasing speed too. The new Toshiba drives spin at 7200 RPM, replacing the slower 5400 RPM Segate Barracudas. 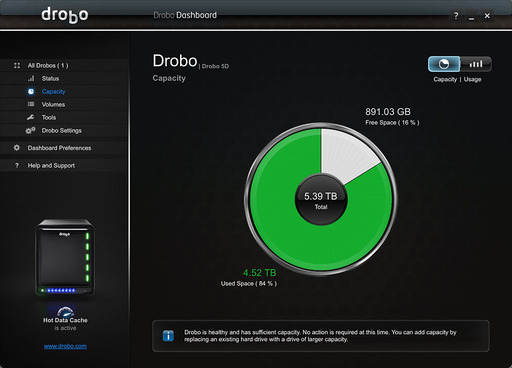 This is what my Drobo Dashboard looked like before the upgrade. Just a few more RAW files, and I would begin to see the yellow warning message.

The process was fairly simple. I shut down the Drobo, ejected the first 1 TB hard drive, replaced it with a 3 TB Toshiba, then rebooted. The Drobo formatted the new drive for me, then went about its business of adding it to the fold. Seven hours later, all the lights were green, and I was ready to go.

I did a little testing and was pleased with how it responded. So I went for round 2. Once again I shut down the Drobo, replaced a 1 TB drive with a 3 TB Toshiba, and waited another 7 hours for the process to run its course. This is what I was greeted with when I reopened the Drobo Dashboard. 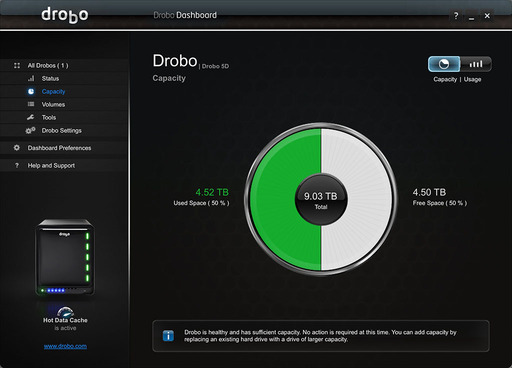 Here's the capacity chart after the 6 TB upgrade.

I tested the new units by opening a large Aperture library that I store on the Drobo. Everything worked great. Browsing was fast, zooming was smooth, and image editing was performed without a hitch.

When you look at the Drobo capacity pie chart, you'll see that there's 9 TBs of available storage, even though I have 13 TBs of hardware in there. The other 4 TBs are used as part of Drobo's backup system. That's how you're protected if a drive goes bad. You won't lose any data. This same system allows you to upgrade the drive bays, as I've explained in this article.

The Drobo 5D can hold a maximum of 32 TBs of storage. For now, I'm happy with the four 3 TB drives and the lone 1 TB Seagate. I'll probably upgrade that bay with a 5 TB 7200 drive once the prices drop a bit more.

In the meantime, I'm back to backing up my Aperture and Lightroom libraries. In fact, with all of this additional storage space, I should go out and shoot a few more pictures.