Think about the things that you might want from a portable power pack while on a roadtrip. A unit light enough to toss in your bag while on hike would be good. A powerful flashlight is always helpful on the road. But what if you returned to your car only to discover that the battery was dead because you left a light on? Wouldn't if be nice if your power pack was robust enough to jump the car? Meet the Cobra JumPack CPP 9000. 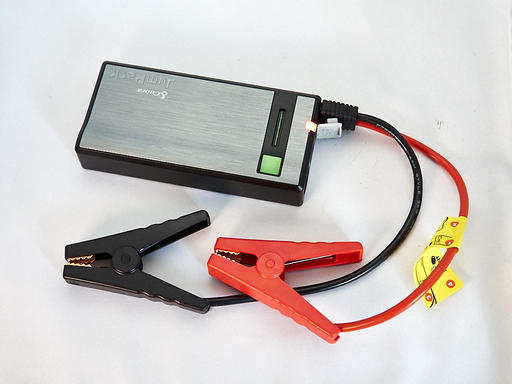 The jumper cables plug into a special port on the JumPack. They can be left in the car while you carry the basic unit with you while on foot.

I know it sounds crazy, but it works. When the cables are connected to the JumPack, it has a 200 Amp starting current, with a 400 Amp peak current that can jump start most cars multiple times on a single charge. It uses a 7500 mAh Lithium-Cobalt battery and special circuitry to get this job done.

Yet, the JumPack is not much bigger than my iPhone X and weighs less than a pound. So I can carry it with me to power up my USB devices. 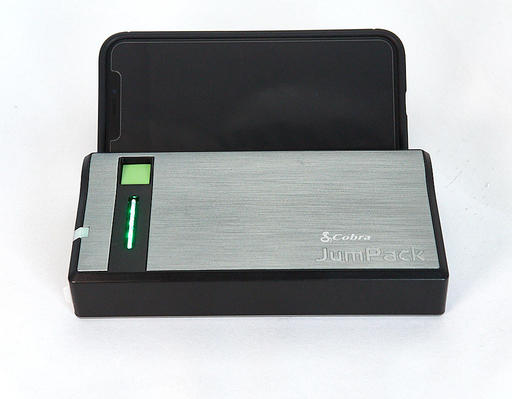 The unit is light enough and compact enough to fit in your backpack or gear bag. Here it is next to my iPhone X.

For refueling USB devices, such as smartphones and tablets with the with the 5-Volt/9-Volt output port. All you have to do is plug the phone's USB cable into the JumPack, and it automatically starts charging it. You can use the device while it's connected to the power pack. 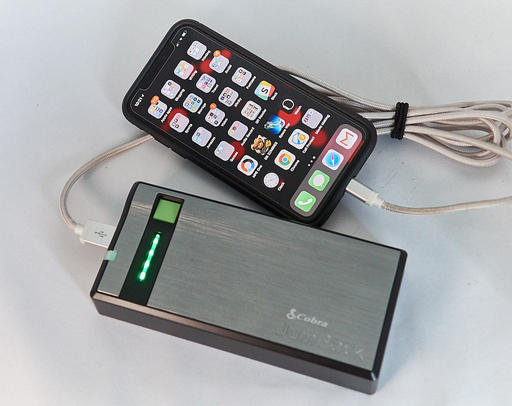 Charging the iPhone X via the JumPack's 5-Volt/9-Volt port.

There's plenty of safety built-in as well. The JumPack is built to be compliant with safety standard UL 2743. Even when you're jumping the car, everything is protected via its cutoff circuitry. To jump a vehicle, connect the cables to the battery, then connect the JumPack. You'll first see a red LED indicating that it's verifying the connections. Then the light will turn yellow while it's transferring power to the battery. Finally, when the LED turns green, you can start the ignition. 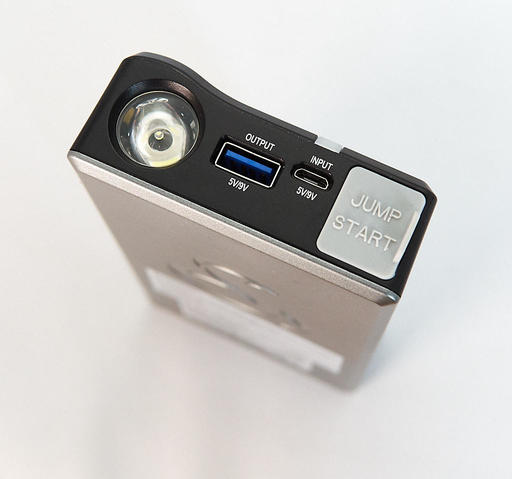 Input and output ports, plus the LED flashlight.

The 500 lumen, high-intensity flashlight features strobe and SOS functions for emergency assistance. Hold the green button for 3 seconds to turn on the lamp, then cycle through the different functions by pressing the green button. The flashlight does work while you're charging a USB device, so both functions can be tapped simultaneously.

The JumPack includes a mini-USB cable that you can use for recharging the unit via any USB charger. In my testing, it took about 3 hours to refresh the JumPack from 25 percent to full charge, using an Apple 10 watt USB charger. The JumPack will hold its juice for 8 months. So it you have it stored in an emergency kit, I would top it off twice a year. 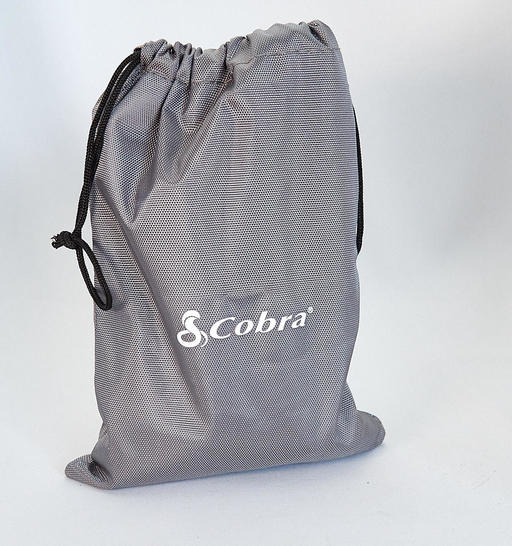 The JumPack kit includes the power unit, USB cable, jumper cables, and a bag that holds everything.

The Cobra JumPack CPP 9000 is available directly from the Cobra website for $129. It's powerful enough to start a V8 engine, motorcycle, or boat. And it's light enough to slide into your camera bag. I'll definitely have it with me on my next roadtrip.

The JumPack has a high Nimbleosity Rating. What does that mean? You can learn about Nimbleosity and more by visiting TheNimblePhotographer.com.