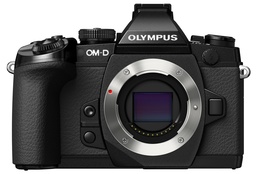 The Olympus OM-D E-M1 is the successor to both the OM-D E-M5 and the E-5, providing excellent performance with both micro four thirds and four thirds lenses. How did they accomplish this feat? By developing "Dual Fast AF" that works for both types of mounts.

When a micro four thirds lens is mounted on the E-M1, it uses contrast detection AF for swift focusing. When Four Thirds glass is attached via an Olympus adapter, the camera switches to on-chip phase detection AF. I had a chance to shoot with both mounts, and indeed the technology works.

As a result of this feature integration, the E-M1 looks different than either the E-M5 or E-1. In many ways, it's a whole new camera. The E-M1 does retain the distinctive electronic viewfinder housing of the E-M5. But Olympus has added a built-in grip and rearranged the top deck controls. The on/off switch has moved from the back of the camera to the top left (as you hold it in shooting position). And the exposure mode dial is now on the right side. 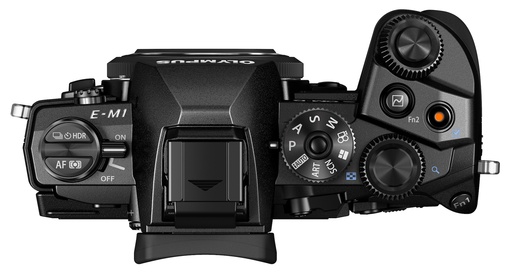 Currently, there is only a black model available. Some of the finer details are also different, such as the textures for the control dials and the shapes of buttons and switches.

As you may have anticipated, there are plenty of feature improvements with the new model. Here are a few of the highlights.

I'm hoping to receive a camera to test soon. I'll report more after some hands-on work.