This week on The Digital Story Photography Podcast: The Inside Scoop on the Olympus OM-D E-M10 Mark II, Eye-Fi for WiFi Cameras? Apple RAW Update - all of this and more on today's show with Derrick Story.

Weekly Update - "Modulo Camera Promises Unlimited Dynamic Range" The Photography Blog reports: "The new solution, developed by MIT researchers, gets around the limited well capacity of conventional sensors by resetting the sensor capacitors whenever the 'well' gets full, and uses an inverse modulo algorithm to calculate how much light the reset sensors took in. This algorithm recovers a much larger dynamic range. For example, if a certain camera sensor can record eight bits of information, then when those eight bits are filled, the capacitor will be reset to zero. The number of resets is recovered by the algorithm, which then calculates the relative brightness of each area of the photo. Interested readers are encouraged to visit the project's website and read the technical paper published by the researchers."

In other news, the Phoblographer posts: Reports of Sony's New APS-C E Mount Camera Boast 4K 30fps Stills - "The Sony A6000 is a great camera, but apparently there is something coming that won't succeed the camera but instead live above it as the company's flagship APS-C E mount camera. Mirrorless Rumors states even more beyond what they were telling us, and this time around these reports claim that the camera will have a 2.8 million dot EVF and many more video-centric features. Besides mic input support, the camera is said to have a 30 fps 4K photo mode similar to what Panasonic offers with their latest cameras. Plus, even more video-centric features will be added according to what the reports state." 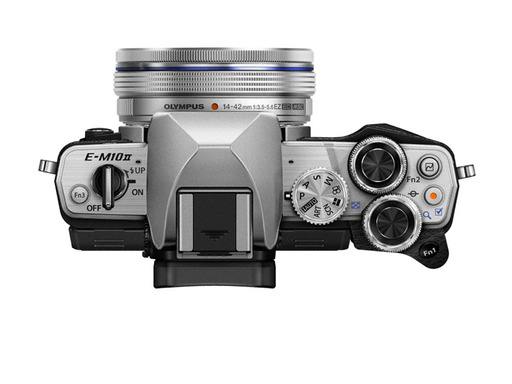 Olympus has upgraded both the interior and exterior of the very popular OM-D E-M10. The new model still retains the 16MP Four Thirds sensor and very compact body. Beyond that, however, the dials and body have been upgraded with premium components. And under the hood, we see better image stabilization and more versatile movie options. Here's an overview of the improvements.

How is it different than the original?

Olympus was able to squeeze 5-axis image stabilization into a super compact body while still keeping the popup flash. I think the flash is important, not only for spontaneous fill light, but to serve as the wireless controller for off-camera lighting.

Additionally, the sequential frame rate is now a very respectable 8.5 fps. And Olympus has added the clever AF Targeting Pad that allows you to use the LCD to control AF functionality.

What the E-M10 Mark II Doesn't Have

The new model doesn't include weather sealing or 40MP High Rez Shot. Also, movie recording is staying at HD - no 4K video. But the price tag is also $649 compared to more than a thousand for its big brothers. In my estimation, that's a lot of camera for the money.

Here's why I sometimes use Eye-Fi cards in my cameras that have built-in WiFi. You can read more about this by visiting c't Digital Photography Magazine.

Apple has released the latest version of Digital Camera RAW for OS X Yosemite, adding support for half a dozen cameras. The 6.06 update now supports RAW photos from the following cameras:

The update can be downloaded by visiting the 'Update' tab in the Mac App Store.

Fall Color with Safari West: October 23-25, 2015 - Sonoma County has rolling hills covered in vineyards, beautiful trees, and gorgeous blue skies. What a prefect place to shoot Fall color and bolster your landscape library. But there's more. We include environmental portraiture with a professional model, and an exclusive African wildlife photo adventure at Safari West, led by a professional photographer, plus a few surprises. This is our longest running workshop of the season, and for good reason. Two full days plus pre-workshop reception, breakfast and lunch, excellent swag, professional model, private Safari West adventure with a pro photographer guide - all included for just $599.

Thanks to everyone who recently reviewed the TDS Podcast in iTunes!

BTW: If you're ordering through B&H or Amazon, please click on the respective ad tile under the Products header in the box half way down the 2nd column on thedigitalstory.com. That helps support the site.

In addition to subscribing in iTunes, you can also download the podcast file here (28 minutes - MP3 version). You can support this podcast by purchasing the TDS iPhone App for only $2.99 from the Apple App Store.