Apple RAW Update 6.20 adds compatibility for 9 new cameras for its Photos app and system wide on Mac OS X. The new cameras are (including the PEN-F): 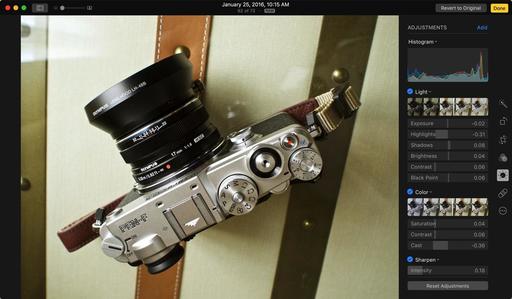 RAW files from these cameras can be processed natively on Mac OS X. For a complete list on cameras supported, see Apple Support Document

The Apple Photos Book for Photographers

For photographers who are more than just casual snapshooters, or who are making the transition from Aperture or iPhoto, The Apple Photos Book for Photographers shines a light on the sophistication of this app and the ecosystem it taps into. Available as an eBook now, and coming to print later this year.

For hands-on tutorials, be sure to take a look at Photos for OS X Essential Training on lynda.com. I cover everything you need to know to get the most from this surprisingly powerful image management application.