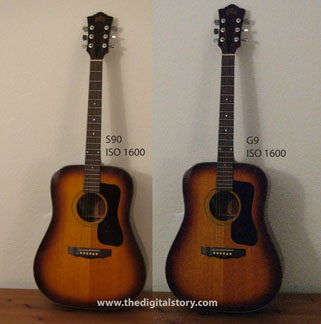 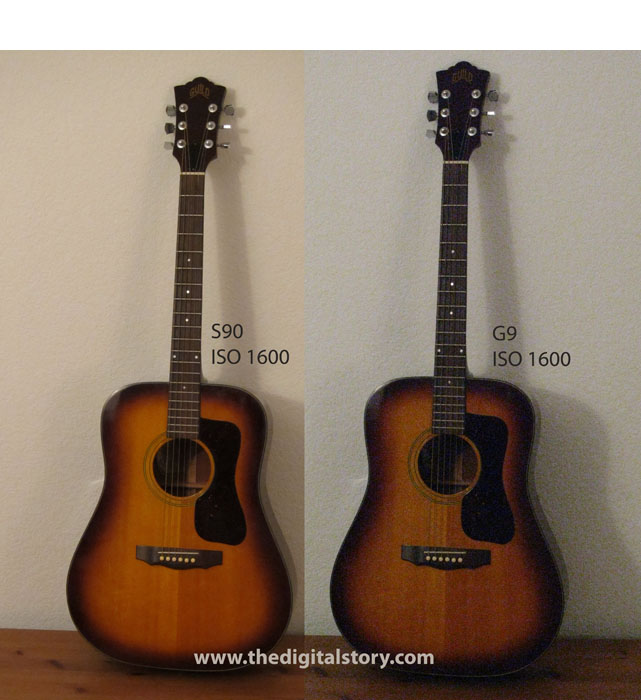 In the article, The Conversation Has Shifted from Megapixels to Image Noise, I observed that we've moved on, at least temporarily, from the megapixel wars. Case in point with my own cameras. The Canon G9 that I reviewed on Oct. 2, 2007 squeezed 12.1 megapixels on to a 1/1.7 inch CCD sensor and processed the information with a DIGIC 3 processor. Now, two years later, both the Canon G11 and S90 have upgraded to DIGIC 4 processors, but only 10 megapixels on the same sensor. Why step backwards? Well, in part because we asked Canon to. Our theory was that if you cram fewer photosites on to the same sized CCD, you'd generate less heat, and therefore have less image noise at higher ISO settings.

Improvement with the S90? You betcha! Side-by-side comparison of ISO 1600 shots with the Canon S90 and two year old G9. Even in these smaller shots (click on image to enlarge) you can see a big difference. Go to the full-sized comparisons to see more detail.

Were we right? I decided to run a comparison between the Canon G9 (a camera near and dear to my heart) against the new PowerShot S90. I mounted each camera on a tripod, set the aperture to 5.6, and took shots of the same subject in the same lighting at ISOs 80, 400, 800, and 1600. I then published full sized comparisons that you can view at 100 percent and judge for yourself. No image editing of any kind for these shots. They were high quality Jpegs that I spliced together in Photoshop, and then left it at that.

My conclusion? No contest. The S90 is clearly the better camera at ISO 400 and above. In this case, Canon found a way to make our theory correct. Take a look at the posted samples and decide for yourself.

As for me... well, I'm impressed with the image improvements in the Canon PowerShot S90. There are plenty of other features I like too, and I'll touch on those in a subsequent post.

Derrick,
Thanks for the ongoing comparisons. They are very helpful for peole like me wanting a small if not pocketable (is that a word?) substitute for my DSLR.
Is it reasonable to expect the same improvements in image quality with the G11 over the G9 and G10?

Yes, the G11 and the S90 should perform about the same.

I'll run another test against a larger sensor camera to gives us a bit more perspective too.

Yeah, Mark, I was actually a little surprised by the ISO 1600 performance on the S90. I knew already that it was terrible on my Canon G9, but the improvement with the S90 is dramatic. I checked the metadata about 5 times to make sure I wasn't crazy.

I'm going to run a second test against a larger sensor Olympus E-P1, which I know does well at 1600. That should give us a good feel for where the S90/G11 stands.

Derrick, your photos remind me of a little experiment I did a while back. Dusted off my old Olympus C2000Z, and took a shot inside my house. Then I took the same shot with my Canon SD630. Handheld, auto everything on both. The Olympus shot came out WAY better - warmer tones, but also noticeably sharper. In my case, it was the f2.0 lens on the older camera, an issue you've talked about recently. Megapixels truly are the least important spec!

I love my S90 but I have a couple of concerns that maybe somebody here can help with. The first concern is with the video. That being, my previous camera (SD870) on Vivid Color produced really nice colors and clarity (an AVI file). Now, even with the S90 on Vivid, the .MOV file is blah in color and clarity. Sure on my Quicktime player I can adjust the color and contrast a bit to help out, but then I have to do this every time I play a video. Any suggestions?

Secondly, the jpegs just don't look as good on my computer as they do on that wonderful 3" screen. I've tried a Lightroom preset upon import and to get it to look like the S90 the pixels are bent a little too much out of shape to keep quality. I tried raw files, but then the lens distorion isn't fixed and they are enormous in size (are they uncompressed?) Thanks in advance.

I don't have any suggestions around the video with the S90. I've shot a little, and it seems fine. But like you said, compared to the other camera you have it seems different. It probably is, so I would continue to experiment with the settings to see what you can get.

As for the LCD, you're right. It is bright, high resolution, and vibrant. Your pictures will look better there than anywhere else. That's just the way it is. But the image files have lots of good information in there that allows you to display beautiful photos on your computer too. You just have to get your workflow down. The better you get to know the camera, the easier this will be.

WHICH SENSOR IS CANON USING IN THE S90 ? IS IT THE NEW SENSOR FROM SONY THAT IS USING BACKLIGHTING WHICH IS SUPPOSE TO BE A LOT MORE SENSITIVE TO LIGHT BUT NOT ABLE TO SUPPORT HD VIDEO, IF SO PERHASP THAT WOULD EXPLAIN MOST OF THE DIFFERENCE BETWEEN THE G9 AND S90 SHOTS, AND PERHASP NOT AS MUCH OF CANON FIXING THE NOISE PROBLEMS AS THE NEW SENSOR.

I'M NOT SURE IF THIS IS A CANON DEVELOPED SENSOR OR THEY ARE USING THE NEW SONY BACKLIGHT SENSOR AS SOME OTHER SYSTEMS ARE USING TO GET GOOD LOW LIGHT PERFORMANCE BUT NO HD VIDEO SUPPORT ONLY VGA.

Dear Derrick,ive tried my cousins g9 and like it a lot,but im no pro but love a good camera.
which one should i pick from the two,the g9 or the powershot s90,and does the s 90 do as good as the g9,im so confused by it all,but my dear girlfriend wants to buy me a new one for christmas as my other camera got droped on holiday.

Please advise me,also bearing in mind the g 9 is hard to get now and im not that keen on the g 11.