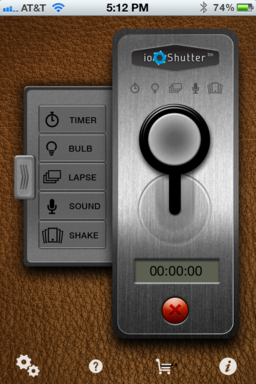 The iPhone display is so beautiful. Wouldn't it be great to use it as a control panel for your DSLR? Now, thanks to enlight photo, you can.

The ioShutter Release Cable ($69.99) with accompanying iOS apps (free "lite" version, or the "pro" that costs $9.99, shown in the illustration to the right ) enables you to shoot with your DSLR in a variety of ways:

The system works like this. You buy either the E3 shutter release cable that fits Canon Digital Rebels, Canon 60D, Pentax K-5, and other cameras that use the mini-jack type socket. Or you can purchase the N3 shutter release cable that works with the Canon 5D series and pro Canons that use the larger socket connector for remote releases. Plug one end of the cable into your camera and the other end into the headphone jack of the iPhone. Fire up either of the iOS apps, turn on the camera, and start shooting.

I tested the E3 release with a Canon T1i and a Pentax K-5, using both the lite and pro iOS apps. All of the functions worked as advertised. There were no glitches at all with the Canon, and only one with the Pentax -- it would sometimes automatically go to burst mode when using the sound trigger. Aside from that nit, performance was solid.

If you get a phone call while using the ioShutter, you have to disconnect it from the headphone jack to communicate with the caller. I learned this one the hard way.

All of the functions of the ioShutter are useful, but the one that most will be interested in is the time lapse control. I tested this with the pro version of the app connected to the T1i. I programmed an exposure for every 4 seconds.

Keep in mind that if you want full programmability for your time lapse work, you have to pony up the additional $9.99 for the pro version.

The ioShutter works as advertised. If you have a compatible camera, and an iPhone in your pocket, then all you have to carry is this light cable. By doing so, you have access to a variety of handy controls.

That being said, I like the flexibility of packing just this light cable, yet having a variety of triggering functions available, that I can control via the lovely iPhone interface.

Do you know if this works on an iPod or just the iPhone. Also, is there any kind of generational cut off for the device (3rd gen iPod, 4th gen iPod, etc.)

I bought one of these from a kickstarter project.
http://www.triggerhappyremote.com/

It works on iOS and Android phones. They just got funded last week so it'll be June before I get mine.

Hi Derrick - saw you mentioned this on TWIP

This (https://triggertrap.com/products/triggertrap-mobile/) looks like a much cheaper competitive option. It still has Free and $9.99 Pro version of the IOS App but the cable/dongle combo is just $20 and they support hundreds of camera's from different manufacturers

Thank-you for bring the ioShutter Release Cable and app to the attention of the TWiP army (err, audience...)! It looks VERY interesting!!!
However I was wondering if anyone has tested the app with the PocketWizard CM-N3-ACC Remote Cable
(International Catalog Number: CM-N3-ACC
US Catalog Number: 802-453 )
with a Canon 5D Mk II Camera? (yup, this is the camera I use). The PocketWizard cable is around the $100 mark, and for those of us that have it along with the PocketWizard system, the idea of spending another large amount for yet another cable, well doesn't align itself with the budget minded photographer... (i.e. non-professional, just a avid amateur photographer)