What goes on behind the scenes at Leo Laporte's TWiT studio in Petaluma, CA? I recently spent an afternoon there recording scenes with a 3rd generation iPad to create the time lapse movie, TWiG in 60 Seconds. The process was as interesting as the activity I recorded. 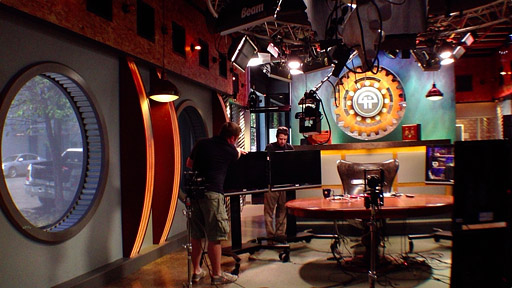 Screen grab from the time lapse movie "TWiG in 60 Seconds" (This Week in Google) recorded at the TWiT Brick House Studio with a 3rd generation iPad.

The latest iPad features a 5-megapixel iSight camera that records 1080p video at 30fps. Its low light performance is much improved over the 2nd generation model. Combine that hardware with iStopMotion for iPad, and I have a complete solution in a very portable package.

TWiG in 60 Seconds, the movie

How Did You Record the Panning Scenes?

One of the impressive features of the TWiT Brick House Studio is how big the facility is. In order to convey that sense of space, I wanted to pan during the movie. To accomplish this, I used the StarLapse camera motion system made by Losmandy. The basic system sells for $575, and it includes camera mounting plates, battery-powered controller, interconnecting cable, and a 12-volt cigarette lighter power cord.

How Did You Mount the iPad to the Rig?

Makayama makes a clever accessory called the Movie Mount for iPad. Not only can you attach your iPad to a tripod or motion system, but the mount also accommodates accessory lenses and includes a shoe mount (for microphones, etc.). By using the Makayama, I was able to attach a wide angle lens to the iPad so I could capture more of the Brick House Studio environment.

Once I had all of the hardware in place, I launched iStopMotion and set it to record a frame every 3 seconds. I captured a variety of scenes, some with panning, and others without.

I then used the DropBox feature in iStopMotion to upload the raw footage to my online storage. By doing so, I could access the files from my MacBook Air, and assemble the movie using Final Cut X. I uploaded the finished file directly to YouTube from Final Cut.

In the past, I've also done the editing right there on the iPad using iMovie, such as in this title, The Overlook.

When Oliver from Boinx Software came to me with the idea for this movie, I wanted to do it right away. What a great opportunity! And thanks to the support from Leo and his crew, plus the great guys at Losmandy and Makayama, we were able to take you behind the scenes at the TWiT studio for a glimpse of how Leo Laporte informs and entertains us on a daily basis.

Very cool. I love Leo, he is a national treasure. I have learned so many things because of him.

So when are you coming on a proper TWIT, since TWIT photo is no longer? :)

You might this time lapse from the White House for aids day. Here is URL: