If you like pancake lenses, you're going to love this. The just-announced Olympus BCL-15mm f8.0 Body Cap Lens is literally the size of a body cap, yet transforms to become a fixed focus snapshot lens that's a blast to shoot with. The lens is just 9mm thick, and when the cover is in place (to protect the glass), it looks like a body cap for your micro four thirds camera.

In the Olympus booth, they were calling it "the cookie." 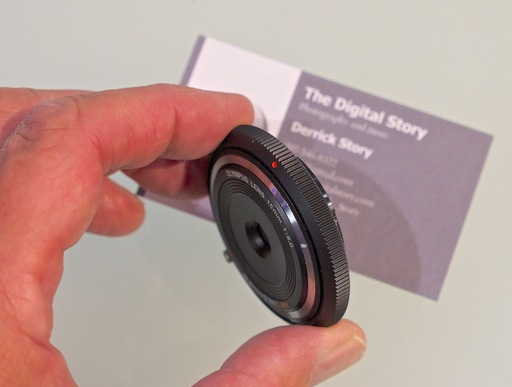 The 15mm will be perfect those who have a back-up body. In my case, I pack the PEN mini as a second camera. With the body cap lens, the PEN will occupy even less space in my camera bag.

It's fixed-focus. So you just shoot. Don't worry about the AF locking in on the correct element in the composition. I think this will be very appealing to street shooters.

In my informal tests on the OM-D in the Olympus booth, the 15mm rendered quite nicely. If has 3 glass elements and a fixed aperture of f/8. 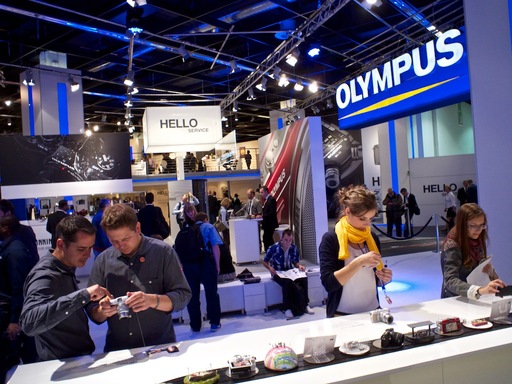 We can expect to see this holiday stocking stuffer around mid-November. It should retail for approximately $50 US.

Quick correction - actually the body cap is *not* fixed-focus. The little lever on the front allows manual focus...

You're absolutely right Charlie. However, I will say this, I liked my images with the body cap much better when I set it to "non-close-up" mode. That's what I used to the photo published with the article. What I do like, is how you can move that little lever to lens cover mode to protect the glass. Quite nifty!

on my EP-1, this will be just great fun and highly pocketable. I want it, and I want it today!

At some point my E-PL3 will be replaced by whatever comes after the OM-D. When that happens, this lens will probably live on the E-PL3 more than 50% of the time.