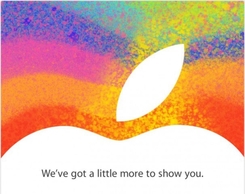 If indeed Apple announces the iPad mini on Oct. 23, 2012, the device will have a big impact for nimble photographers. The current iPad is the largest surface area object in our "travel light" camera bags. Measuring 9.5" x 7.31", the iPad determines the type and size of transport we must carry to be fully functional while on the go.

Reducing that surface size to something in the neighborhood of 7.85" on the long side means that we can carry a Compact System Camera, iPad mini, and accessories in virtually any camera bag. But in order for this to work, the new tablet will need certain attributes.

Will we get these features? We'll know soon enough. The announcement is in less than a week (we think...).

What would be really nice would be an SD Card slot. But I somehow doubt we will see that.

So you can forget about Retina for another couple of years.